If you ever drove on East West Highway in Silver Spring, you likely passed without knowing it one of the country’s oldest national monuments. Same thing if you biked on the Capital Crescent Trail or walked along Carroll Street in Takoma.

That’s because the boundary stones placed in 1792 to mark the border between Maryland and the new federal district were neglected for much of the nation’s history and suffered ravages caused by time, weather, vandalism and suburban development. But of the 40 boundary stones put in place, 36 remain and preserved because a few people or groups cared for them. Nine of the stones were placed along Montgomery’s border.

Surveyor Andrew Ellicot and astronomer Benjamin Banneker mapped out the square in what was then largely wilderness that became the District of Columbia from land donated by Maryland and Virginia. They placed the stones an even mile apart, or as close as possible where the terrain couldn’t take one.

While eight of the nine along Montgomery remain, they don’t look like they used to. They were made of Aquia Creek sandstone from Virginia, the same source used for the White House and Capitol. They originally stood four feet above ground. Pyramids on top washed away over the centuries. Much of the inscriptions carved into them have been worn down, but one side of each reads “MARYLAND” while the other says “JURISDICTION OF THE UNITED STATES,” since the federal district hadn’t been named yet. The sides of the stones give their compass location at the time.

For their first century, the stones sat largely neglected in the middle of nowhere, though they were the first and oldest monuments in a city noted for them. No one is known to have taken a major study of them until surveyor Marcus Baker cataloged them for a report for the Columbia Historical Society in honor of their centennial. In 1897, Baker reported “Washingtonians who have gone afield in the suburbs may perchance have somewhere come across an old monument bearing an inscription of which JURISDICTION was the most prominent word. Those who have done so have looked upon one of our most venerable monuments…”

Then in 1915, local chapters of the Daughters of the American Revolution (DAR) decided to save the markers. “It came to the attention of the DC DAR daughters that this is our heritage; we need to preserve them,” explains Monica Huegel, regent and former historian for the Columbia Chapter, which adopted four of the Montgomery stones.

On July 12, 1915, the chapter hosted a dedication for NW Stone #4, then next to the Cabin John Trolley, now right off the Capital Crescent Trail. The DAR put iron fences around most of the monuments. “The stones had really fallen into disrepair by that time,” Huegel says. DAR’s Revolution Magazine reported in September 1915: “In line with the work of the Daughters of the American Revolution for the preservation of historic landmarks and buildings in America, the Columbia Chapter has undertaken to interest the officials of the District of Columbia in the matter of preserving these first permanent records of the capital’s boundary lines. It is the purpose of the society to have placed about this fourth mile stone, and about other similar stones, an iron fence.”

So DAR built iron fences, most of which remain today. Most cost $18 each in 1915 dollars.For decades thereafter, DAR chapters cared for the monuments. But the group reported in 2001: “DAR involvement with care and maintenance of the stones ceased — at 1east temporarily — in 1996 when we were told by our member who was then the chairperson for this effort that the National Park Service had taken over our responsibilities. At the time, no one seriously questioned any whys or wherefores of this arrangement, and our active efforts ceased. We have since learned that this was perhaps the result of one or more misunderstandings on the part of both ‘sides.’” But care deteriorated.

So in 2005, the American Society of Civil Engineers — National Capital Section formed a National Capital Area Boundary Stones Committee to work with DAR on preserving the stones. Engineer Stephen Powers guided that effort. But “a lot of those people are retired or gone,” Powers says. “We haven’t met in years.”

Who is legally responsible gets tricky. For the nine locations along Montgomery County, three remain at least half on federal property and one in a local park. The cornerstone at the District’s northern tip lies in a no man’s wood and others remain on private property but the District government retains an easement. Lawyers determined that the D.C. Department of Transportation owns them. The stones were placed on the National Register of Historic Places, but that doesn’t guarantee preservation. “If someone wants to dig one up and put it in a box, they certainly can” if it’s on his property, Powers acknowledges.

And if our forefathers hadn’t decided to put the stones there, Montgomery County today would encompass 36 additional square miles and include Georgetown. 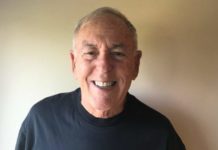 Speaking of sports with George Solomon