Mead, an alcoholic beverage made from fermented honey, is not a mainstream drink.

Manisha Eigner, head of business operations at Clear Skies Meadery in Gaithersburg, hopes to change that.

“Wine and beer each have their identity. We really hope to make mead your next beverage of choice,” Eigner says.

“I have a lot of industrial experience,” Eigner says “I approached [Bodenstein] and said, ‘How about we do this together — I do the business operations, you do the mead.’”

The name Clear Skies is based on the middle names of Bodenstein’s daughters. Jacob Latour joined the team as assistant brewer, and helped Bodenstein and Eigner get the meadery up and running. After bringing his own homemade beers to his interview, Eigner and Bodenstein were sold. “Talk about bribing the officials,” Bodenstein laughs. “Jacob truly has been a jack-of-all-trades,” Eigner says.

Bodenstein and Latour spend hours perfecting the meads. Despite being honey based, Bodenstein says the meads aren’t toothache inducing. He compared their sweetness with that of a Riesling wine. “We don’t really go much more in sweetness level over that because we really want to dispel the idea that, ‘Oh it’s fermented honey, so it has to be sweet,’” Bodenstein says. “Like, no. It can be bone dry.”

All of Clear Skies Meadery’s beverages are made in house, underneath the Kentlands taproom, by Bodenstein and Latour. The main honey source is Sandt’s Honey in Pennsylvania. The meadery also gets honey from an apiary in Easton, which has hives across Maryland.

Eigner says they’re working with the Maryland State Beekeepers Association to localize the meadery’s honey resources. “We really hope in the future to have local batches of honey,” she says. “That is one of our biggest goals in terms of environmental footprint.”

Some ingredients are already local, such as the cherries in the cherry mead, which were handpicked by staff from Homestead Farm in Poolesville.

While mead largely consists of honey, water and yeast, the process for making it can take months depending on the intended flavors. Bodenstein refers to the mead-making process as “consumable chemistry.” Latour explains that mead is made by diluting raw, unfiltered honey in a conical — a large cylinder with a cone on the bottom — until it gets to its desired sugar content.

“We’re basically mixing it in a big ole’ vat,” he says.

Once at its desired sugar content, the yeast is pitched in and then the concoction is sealed for fermentation for one to one-and-a-half months. Then, the conical is either emptied into a keg or a bright tank, which is where the mead goes if flavors are going to be infused, Latour says.

One batch, or barrel of mead, which is approximately 35 to 40 gallons, uses anywhere from 60 to 120 pounds of honey.

Clear Skies offers 12 meads, 10 taps and two kegs at any given time. Six of the meads are swapped out for seasonal flavors throughout the year. The next seasonal flavor set is the winter batch, which will be available the first weekend in December. All of the meads offered are gluten free and 13% alcohol.

Bodenstein says one of his favorite parts of the business has been turning beer lovers into mead fans by giving them a hopped mead, which has similar qualities to beer. “We jokingly refer to that as our gateway drug for beer drinkers,” he says. 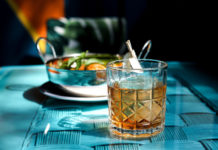 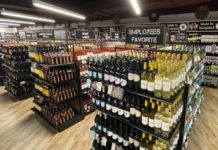 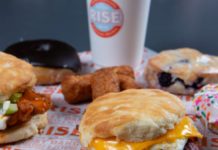