Eight years ago, Debi Schenk lost her VP job at the supplement and health content company Healthy Directions. Her parents had just died, and her husband filed for divorce.

“I literally didn’t know what to do with myself,” she recalls. “I was at rock bottom.”

So Schenk, a long-time yoga practitioner, turned to it for strength and solace. She transformed the basement of her Rockville home into a yoga studio and began attracting clients so she could work at home while raising her two children, who are now in college. Between teaching classes at area yoga studios and for private clients in her home, she was able to make ends meet.

But the frenetic pace of teaching upwards of 35 classes a week became exhausting, and Schenk began to explore other options to meld her business skills and love of yoga.

Last July, she opened Park Potomac Yoga in Potomac. The yoga studio has both classes and private and semi-private sessions.

“We offer more beginner classes than anyone around here,” she says. “We want the classes to be small enough so people feel safe and comfortable learning yoga with us. We know everyone’s name who comes through the door. We want it to feel like a community.”

The studio has eight teachers, and, in addition to classes for yoga neophytes, it offers intermediate and advanced classes as well as one for seniors and a heated yoga class. There are also one-time classes in self-defense. The studio hosts yoga parties and team-building events when requested. New students can get a one-time, 30-day pass for unlimited classes for $30. After that, a one-month pass is $120, or $99 with auto pay.

Getting the business off the ground wasn’t easy, Schenk says. It took a while to find a space with affordable rent, and she has competition from a Lifetime Fitness located just a block away. Schenk says Park Potomac Yoga’s classes are much smaller so that students get more individual attention.

“It’s been challenging, adventurous, stressful, everything you could imagine when someone decides to open a business,” she says. “I did my own marketing and website. It’s literally been a one-woman show.”

Looking back over the last nine months, Schenk sums up the experience by saying, “It wasn’t the easiest choice, but it was a good choice.”

When stressed, Schenk remembers what drew her to yoga in the first place. Healthy Directions offered free yoga classes when she worked there, and she decided to give yoga a try.

“I was surprised that I loved it so much right away,” she says. “I was never really good at anything athletic. I tried a little bit of swimming and going to the gym. But yoga was just different.”

Schenk, who is 52, says that yoga can be good for everyone, from older adults who have lost flexibility to teens who hunch over their phones.

“It’s great for muscle strength and toning. Yoga strengthens and lengthens your muscles. It’s great for energy as well as for calming agitation and for mental health. It’s also good for rehabbing from an injury and for people who don’t balance well,” she says.

While it doesn’t offer a cardiovascular workout, yoga is a good complement to other fitness routines like running and spinning, Schenk says.

“At the end of class, I say, ‘Thank you for coming. Thank you for taking time to practice yoga because you’re giving yourself the greatest gift of all.’” 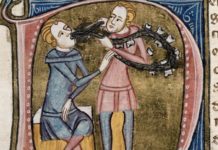 Tips for the aging athlete