We’re here for the 100th time,” says Marcia Kingman, calling to order in early January a meeting of the League of Women Voters of Montgomery County (LWVMC). More than two dozen members are gathered in a small chapel at Cedar Lane Unitarian Universalist Church in Bethesda to set the agenda for LWVMC’s centennial year.

Founded in 1920, at the same time as the League of Women Voters of the United States and the League of Women Voters of Maryland, LWVMC’s original mission was to protect voting rights and elections. Now, 100 years later, it has grown to promote voter access, fight voter suppression, confront money in politics and educate the public on issues such as the environment, immigration, gerrymandering and health care reform.

LWVMC also shares a birthday year with the 19th Amendment, which gave women the right to vote, although the suffrage movement in Montgomery County began decades earlier. In the late 1800s, as suffragists were arrested for civil disobedience, went on hunger strikes and picketed in front of the White House, women in Montgomery County were organizing domestic clubs, explains Claire McDonald, curator of the Montgomery County Historical Society’s new online exhibit, “The Path to Leadership: Montgomery County Women, Women’s Clubs and Suffrage.”

“By the 1910s, these groups had spread into nearly every community in the county, and conversation among many of these women began to shift to social reform and issues of social justice, like the right to vote,” McDonald says.

On Valentine’s Day 1920, six months before the 19th Amendment was ratified, the League of Women Voters was established at the final convention of the National American Woman Suffrage Association (NAWSA). Lavinia Margaret Engle, a suffragist from Silver Spring, was a founding member.

Engle was born into the movement. The daughter of a suffragist, she called Susan B. Anthony, the women’s rights activist and co-founder of NAWSA, “Aunt Susan.” After graduating from Antioch College in 1912, Engle was recruited by another leader in the women’s movement, Anna Howard Shaw, to join NAWSA, where she quickly rose through the ranks. Following ratification, Engle became the director of the League of Women Voters of Maryland.

In her oral history, Engle explains that what drew her to the League of Women Voters, and what kept her engaged, was “a combination of very brilliant and educated women” that “was non-segregated from the beginning.” She remained active in LWVMC, her local League, for nearly 60 years.

Half a Century of Service

Judy Morenoff never met Engle, but she has certainly followed in her footsteps—even winning the Lavinia Engle Award in 2013 for civic engagement. “I’ve done just about everything at some point,” says Morenoff, who joined LWCMV in 1970. “For me, it has been primarily an opportunity to learn a lot about complex issues, how local and state government really works.”

Over the years, Morenoff’s worked on dozens of studies, chaired committees and served as vice president for programming and president of both the Montgomery County and Maryland State Leagues. Currently, as education chair, her committee pressed the Maryland General Assembly to pass a comprehensive school reform bill that, after considerable debate, was adopted before the recent session was cut short by the coronavirus. She also remains tireless in urging members to call or write public officials, which is how League advocacy works to advance its priorities.

What makes the League of Women Voters different from other civic-minded organizations is its multi-issue focus and grassroots activism, explains Morenoff. “It is the members who are involved in creating the positions on which we base testimony on the local, state and national level. It is the members who do the leg work locally on registering voters, putting out the Voters’ Guide and creating candidate and issue forums,” she says.

LWVMC co-President Kathy McGuire has seen an uptick in local membership since the 2016 election, when Hillary Clinton won the popular vote and lost the election.

One of the largest Leagues in the country, LWVMC is “at 500 members and growing,” says McGuire. “Newer members are joining to make democracy work. They are volunteering to register voters, produce the Voters’ Guide, organize candidate forums and keep an eye on what’s going on locally, whether it’s the widening of I-270, affordable housing, education or health care,” she says.

Starting in January with planning meetings at Cedar Lane Unitarian Universalist Church, LWVMC is using 2020 as a year for reflection and renewed commitment. “We’re going to be looking at things like mail-in voting,” says McGuire. “We’re also putting out our Voters’ Guide in Spanish for the first time, gifting League membership to all students and promoting vote411.org for complete voter’s information.”

“What we are reaping today is the result of our predecessors who came doing the work being non-partisan, being effective, being articulate,” says Diane Hibino, co-president of LWVMC. The League is so trusted for being non-partisan that the Montgomery County Board of Elections regularly contracts LWVMC members to monitor all the county’s 232 polling places on Election Day.

“They fought for what they believed in, and continued over the years and helped define what the League is today,” Hibino says. 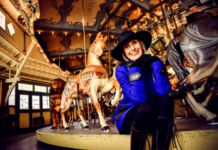 ‘Round and ‘Round With Carol Trawick 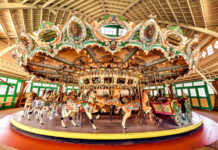 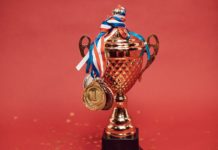