Walking into Rockville’s Thai Chef, one might mistakenly think they have been transported almost 9,000 miles across the globe to a festive night market in Bangkok, Thailand.

Between the vibrant neon chandelier in the dining rotunda, the Thai hit tunes playing and the colorful hand-painted merry-go-round horses suspended above diners’ heads, the year-old restaurant offers childhood whimsy that’s all grown up.

Owner Chalissa Fitts and her mom, Pornnapa Pongpornprot, began their journey in the food service industry with a small Thai takeout in College Park, with a kitchen staff consisting of no more than Fitts, Pongpornprot and one other chef. In 2017, Fitts launched her first full-scale restaurant in the District. Soon after, she set her sights back in Maryland.

“I personally want to live in Rockville. I actually looked for a house around here, but we came across this location during the pandemic,” Fitts said. “So I didn’t get a house, but I got a restaurant. This is my second home anyways.”

Thai Chef opened in Rockville’s Town Square in October 2021. A year later, Fitts said the restaurant is still finding a foothold. “We’re still new, not a lot of people know about us.”

Fitts grew up in Bangkok, before moving to the United States in high school. The menu at Thai Chef includes her childhood favorites, from After School Wontons, which Fitts actually had every day after school, to variations of fried rice, inspired by her mom’s creations from whatever was leftover in their fridge.

Thai Chef, Fitts said, puts a twist on every menu item. Some of her favorite offerings include pork and crab dumplings, pad thai (“of course!”), papaya salad and noodle soups. One standout dish is the Tom Yum Fried Rice, a surprisingly refreshing, tangy mouthful of lemongrass, kaffir lime and roasted chili jam.

“I don’t cook as well as my mom does, but I can make drinks.” Fitts has crafted an extraordinarily creative and visionary cocktail list that incorporates Thai flavors in exciting and unexpected ways.

“I don’t just want a boring margarita. I want a Crazy Thai Lady,” Fitts said, referring to her Thai chili and lime-leaves infused tequila drink, which is named after the loving nickname her dad has for her mom.

Although the cocktails boast strong Thai flavors, Fitts promises they aren’t spicy. “The food is already Thai hot,” Fitts laughed. “You’ve got to cool it down with a cocktail.”

In addition to the already lengthy menu, Thai Chef offers one food and one drink seasonal special. For the autumn months, Fitts infused toasted coconut into bourbon and engineered a truly unique Old Fashioned, which is served smoking alongside a clipping of toasted coconut shavings.

The fall food special materializes as a pumpkin curry dish, which will put any taste tester in the sweater weather mood. “You taste Thai, and then you taste the fall,” Fitts said. While both Thai Chef locations offer seasonal specials, the items will be different at each restaurant. In D.C., the team concocted a cherry margarita called “Blood Moon.”

The fall specials will be offered until the weather turns colder. For winter specials, Fitts is dreaming up a Thai take on the classic Hot Toddy.

Open for lunch and dinner seven days a week, Fitts said patrons will see something new every visit. A New York City-based Thai artist known as Pop is responsible for the eccentric décor. From the hand-painted carousel horses, to the cacophony of a clock, all of the décor was shipped in from Thailand. “I want people to walk in here and feel like they’re in Thailand,” Fitt said. “Like, ‘OK, this is a night market. Let’s get something to eat.’”

Fitts said the restaurant gets a bit busy on weekend nights, but that it can cater to plenty of more people. Groups of 21-30 can reserve the upstairs dining space.

Fitts said in Bangkok, families eat in “way more than we eat out.” The recipes that inspire the dishes at Thai Chef were passed down to her mom from her grandma, who is 97 and still lives in Bangkok.

Working with her mom has proven to be an experience Fitts said she’s grateful for. “She’s 61. She’s the hardest worker I know. She’s still running around trying to find the best mango,” the chef laughed. “I’m grateful. I would not have come this far without my mom. I wouldn’t do it by myself.”

Thai Chef’s Rockville location will announce an all-new outdoor dining experience in 2023. Until then, keep up Fitts’ her latest creations on Instagram (@thaichefmd). “I really believe we have stuff to offer,” she said. “It’s just not everyone knows about us yet. I think once you’re here, you’ll get it.”

Mix equal parts in a shaker and serve rimmed with salt and Thai chili.

Fashion the curry paste with cilantro root, lemongrass, galangal, garlic, basil lead, kaffir lime leaf, red onion and dried red chili. Bake the aromatics at 350 degrees for 15 minutes, followed by pulsing the ingredients for the curry paste together in a blender.

Cook the shrimp in a sauté pan. Sauté the vegetables.

Cook the paste on low heat for one minute in a sauce pan. Next, add coconut milk, followed by coconut sugar and white sugar to thicken the curry, stirring occassionally (3-4 minutes). Add the pumpkin, shrimp, bell pepper and basil leaf. Traditionally in Bangkok, holy basil is used. If unavailable, Thai basil will suffice.

Serve alongside a Crazy Thai Lady. 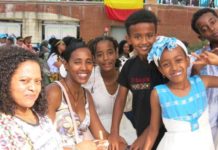 Silver Spring is the epicenter of a thriving Ethiopian diaspora