Music lovers in Montgomery County this summer will once again be able to go to the Music Center at Strathmore in North Bethesda for live music. But instead of turning right into the concert hall, they will take a left toward the performing arts center’s new open-air venue.

Erected on the Music Center’s Trawick Terrace, the Patio Stage is Strathmore’s solution to bringing audiences back on campus in a COVID-19-safe way. Tickets are sold for bistro tables that seat up to four people in a pod, allowing for social distancing. The covered venue feels incredibly intimate; a full house is only 124 people.

Myra Turoff, who volunteered at Strathmore for 11 years and is now a sponsor, has been “chomping at the bit” for a chance to be back. “There’s something about that place I can’t explain. It’s a feeling. It just feels like home,” she says. The longtime Strathmore member thinks the idea of the outdoor music venue “is terrific.”

Joi A. Brown, Strathmore’s vice president of programming and artistic director, is also anxious to be back with a live venue. “The entire industry has been in a complete pause, and artists are eager to get back to work, and we’re eager to welcome them back to our spaces,” she says.

Brown and her staff started experimenting with outdoor programming last October with a digital projection installation on campus. It proved a big success with 10,000 people coming through to view it.

“It really reinforced the idea that people are hungry to be inspired by art and culture,” she says.

Soon after the installation, Brown started looking at exterior spaces where Strathmore could safely host live performances. Trawick Terrace fit the bill. The space is now tented with a roof but no sides, which will protect musicians and audience members from bad weather while providing comfortable air flow.

Ever since the announcement of the Patio Stage and its lineup of performances — Wynton Marsalis & Jazz at Lincoln Center Orchestra Septet open the summer concert series on May 30 — Brown has been receiving emails from donors excited about the range of artists scheduled to perform. And she’s pleased to have so many of Strathmore’s favorite artists return. Latin Grammy winner Nella will perform on June 30, and jazz guitarist Stanley Jordan takes the outdoor stage on July 8.

“We’ll have stunning classical music,” she says. “Some great contemporary and new artists, some artists in residence … something for everybody.”

Throughout the pandemic, Brown and her staff have been working to reconfigure and move performances “at an insane rate,” she says. Hundreds of performances have been postponed, and many of them have been rebooked two or three times due to the vagaries of the pandemic and differing rules in states and counties. One show is already on its fifth date.

“It’s excruciating for everybody,” says Brown, “but it’s been most challenging for artists and the people who work for them.”

Brown predicts there will be several changes to the live-music world post-pandemic. For instance, she posits that tours will be shorter and smaller because the infrastructure around live concerts that once existed is gone – now just a remnant of a pre-COVID world.

However, North Bethesda’s close proximity to New York City makes it easy for musicians to add a stop at Strathmore to any kind of tour schedule they can put together, explains Brown. They can come for a day and go back home after the concert.

While she’s excited about all the upcoming performances, Brown is particularly interested in catching the Emmet Cohen Trio on Aug. 19. Right after the pandemic shut down in-person concerts, Cohen started streaming concerts on his iPhone from his home in Harlem. More than a year later, he’s created a large following, including Brown, for his weekly concert livestreams. Getting to know him in such an intimate way adds to the excitement of just seeing someone so “insanely talented” at her venue, says Brown.

But she most looks forward to opening night with Wynton Marsalis, someone who has performed at Strathmore many times and “feels like extended family,” she says. “Opening night I’ll be weeping.”

Turoff has already made plans to buy her tickets for opening night. “We’ll be very up close and personal,” she says. The anticipation has caused her to reflect a bit on her first experience at Strathmore. Moving to Maryland from New York, Turoff thought the area would be “a cultural desert” — that nothing would compare to her former hometown’s art and music scene. Then she attended her first concert at Strathmore.

“My mouth dropped open, and I thought it was the most beautiful place I’d ever seen. I became a fan immediately,” she says. “I just think Strathmore’s a jewel in Montgomery County.”

The Patio Stage opens Sunday, May 30, through Thursday, Sept. 30, with two concerts for most of performances in order to maintain seating distance and keep capacity low. To learn more about how Strathmore is managing these events, visit strathmore.org/welcomeback.

This story first appeared in our June-July 2021 issue. 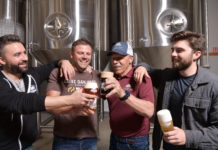