With a consistent color scheme and respect for her client’s collectables, including gemstones and Asian artifacts, Mindy Wagner’s interior design welcomed life and light into a custom-built Laytonsville home.

Armed with degrees in fine arts and interior design, Wagner, of Mindy Wagner Interior Design, also specializes in feng shui, the ancient Chinese practice of finding harmony in environments through the incorporation of five elements: fire, earth, metal, water and wood, she explained. To create balance within a room, Wagner tries to include each. “Some of the feng shui is just very sensible design choices,” she said.

For the Laytonsville house, Wagner said the aim was to create connection throughout the main floor. To Wagner, the most important element of design in this house fell to one word: integration.

“We integrated a very disciplined color palette that went throughout five rooms,” she said. Wagner described the main colors as “very light, cool gray, very light butter-yellow and a light yellow-green.” The metal colors were brass and gold.

In the design, she also incorporated the owner’s collections of items from her marriage to her late husband and their travels together. Wagner said her focus was “finding a way to showcase everything without it looking cluttered.”

For the foyer of the house, Wagner said she searched far and wide to find the console cabinet, ultimately having it shipped directly from China. She noted that having the drawer pull in the center of the console is a classic Chinese design choice. Atop the console are the owner’s late husband’s collection of geodes, including a cathedral type of amethyst. The mirror above the console is framed in bamboo.

In the hallway, Wagner replaced the solid basement door with one adorned with window panes. “[The hallway] looked very restricted,” Wagner said. “I wanted to open up the feeling.”

To create dimension from the hallway to foyer, Wagner painted the hallway ceiling gray, the archway walls light green and the foyer wall pale yellow. “You have … layers that you’re looking through,” she said.

Wagner also selected the light fixture, which is made of glass crystals and oil-rubbed bronze and replaces the former recessed light.

In the powder room, Wagner did a complete makeover. “The only thing that remains of the old bathroom is the same old wood floor,” Wagner said. “I was very fortunate that my client went along with my grandiose dreams.”

The ceiling is metallic gold-painted grasscloth wallcovering. The light fixture on the ceiling is made of Swarovski crystals and has a gold finish. The vanity top is made of engineered quartz. “It’s quite the powder room. It’s stunning in person, it really is,” Wagner said.

Above the toilet are shelves that display the client’s collection of lacquer boxes. Even the gold exhaust fan matches the color scheme, which Wagner said her client found. “She’s an excellent researcher, sometimes she finds things that even I can’t find,” Wagner said.

Wagner designed the window treatments in the living room. “This is something I’m really proud of,” she said. The top part of the treatment, the cornice board, is upholstered and has a zig-zag shape to reference Asian design, Wagner said. The panels are made of the same fabric as the cornice, which is embellished with gold embroidery. Instead of pleated shades, Wagner opted for white sheers. “I wanted it to look very traditional.”

The decorative chest in the living room was moved from the foyer. Not only does it fit perfectly between the windows, but it helps with the feng shui of the room. “I wanted to get the fire element in the room,” Wagner said, referring to the red coloring of the chest.

Displayed on top of the chest are more of the owner’s collectibles, including Japanese samurai practice swords, semi-precious gems and ceramic Chinese foo dogs.

In lieu of a cocktail table, Wagner chose an upholstered oval ottoman with a silky light-gray fabric. Several pieces of furniture were reupholstered, including the bench underneath the window.

Wagner said all of her designs were intended to brighten up the home. “The client definitely wanted to lighten and freshen the whole experience of the house,” she said. 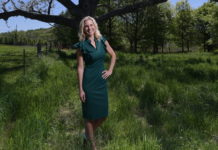