It’s easy to forget you’re still in Montgomery County at the Comus Inn. Between the beer garden, lawn games and live music, the new community gathering space in Dickerson feels far away from the hustle and bustle of everyday life — and that’s the point.

Owner Doug Yurechko got the idea when visiting his mother in Pennsylvania after his father passed away. The whole family went out to a community beer garden and had a great time, he explains.

“We spent essentially four hours there because my son didn’t want to leave,” says Yurechko.

Yurechko realized there’d be a real market for such a spot here. It took him six years to find the right place to carry out that vision, he says, but the 19th-century inn, nestled between horse fields and rolling hills, felt like the perfect spot.

“After taking one look at it, I knew it was the right piece of property,” he says.

Located at the base of Sugarloaf Mountain, the historic inn — previously a fine-dining establishment and popular wedding venue — reopened its doors in October with a new modern-farmhouse style. Inside the building, guests order food and drinks before finding seating, inside or out, for a leisurely meal and some recreation time with friends or family.

The pièce de résistance is the beer garden, complete with a pond and a mountain view. Guests of all ages gather in clusters of Adirondack chairs or at long picnic tables, and there’s an afternoon’s worth of games to play outside, including shuffle board, Connect 4 and bocce, to name a few.

Yurechko points out how guests laugh and talk together, seeming truly engaged with one another. “When people come here, the phones seem to disappear,” he says.

This throwback idea — families spending the day outside together without the distractions of modern life — is what drives Yurechko, who doesn’t measure success the table turnover rate, like most restaurants.

“My goal was to get people who wanted to come and spend half a day here because they were enjoying it so much, which is largely what we’ve done,” he says.

And a big part of that time is spent eating and drinking. The Comus Inn boasts an “elevated casual” menu, as Yurechko calls it — farm-to-table cuisine presented in approachable ways.

The menu features small plates, like homemade pierogis, as well as soups and salads. There are plates meant to be shared, notably the Maryland-inspired Comus crab dip
and nachos loaded with beef brisket and jalapeno cheddar sausage, and a variety of main dishes, Detroit-style pizza and sandwiches. The children’s menu would satisfy any adult, and so would the assortment of desserts prepared by pastry chef Brandi Edinger.

That hyperlocal emphasis carries over to the drink selection, too. The beer garden serves craft beers and wines, many of which are from the Maryland and Pennsylvania areas.

The food and drink might be local, but the Comus Inn boasts a globally renowned culinary director: Chef Sammy DeMarco, a former Travel Channel star who has cooked all over the world, most recently at the Bellagio in Las Vegas.

Yurechko met the celebrity chef, known as Sammy D, through his brother, whose kids went to school with DeMarco’s. Yurechko says the Comus Inn presents a perfect next step for the “chef of the chefs.”

According to Yurechko, DeMarco likes to say, “What a better story than the Brooklyn-born chef who traveled the world, went to Hollywood and then settled on the farm in Maryland to cook for the people again?”

But the inn has a bigger mission than good food. It’s written on every menu and on the back of each employee’s T-shirt: “Have some fun today!” That was Yurechko’s dad’s way of saying goodbye.

“When you go about your daily life, you realize how hard it is to just make time to have fun a little bit every day,” he says. “We’re really just about trying to create and capture this moment in time where you let everything else go.”

This story originally appeared in our June-July 2021 issue. 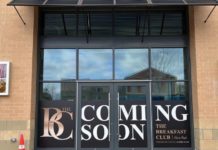